The 1910’s brought significant changes to Vancouver which included the disappearance of the open front porch where life was previously pondered upon, basking in the evening air enjoying conversation with family and friends. The open wrap around veranda common in late Victorian design was soon to be closed in with the noisy arrival of the automobile. This was the last decade to see brick and cobble streets as asphalt soon replaced them.

Extraordinary League Contracting was engaged to undertake a full restoration to this largely original and untouched front gabled 2-1/2 story craftsman style house nestled on the curved picturesque streets skirting first Shaughnessy. Unlike most heritage projects we embark upon, there was no heritage consultant or conservation plan. Given our experience in the heritage realm we largely acted as the blue collar (working) heritage consultant, identifying and working with character defining elements. That coupled with our experience in building and renovating in Vancouver were able to navigate the finicky process involved with renovating in first Shaughnessy which has its very own bylaw.

The project first involved house raising to replace its crumbling foundation. The large 3 flue brick chimney was retained and lifted as well. The new foundation wall was corbelled allowing the east side of the house to seat into the foundation wall, permitting the later raised patio elevation to nearly flush out with the interior floor elevation. Extensive framing coupled with steel allowed for additional wood windows, more headroom and alteration of the existing stairs to the top floor. 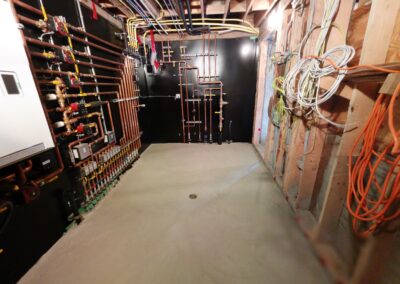 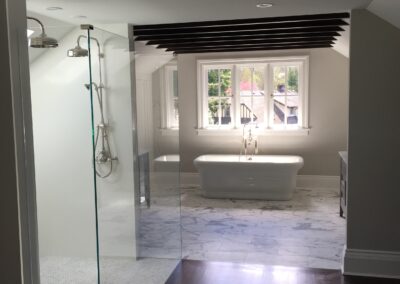 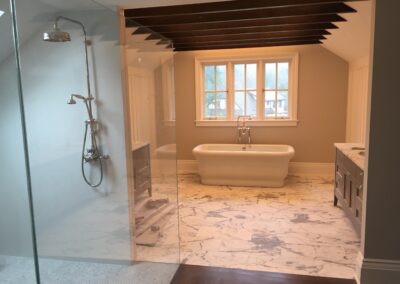 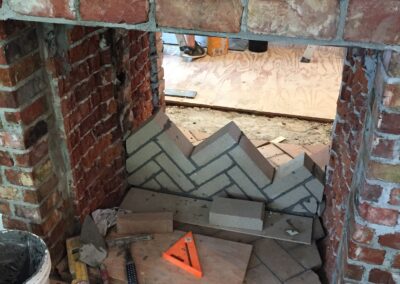 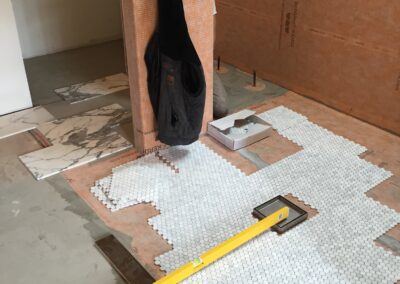 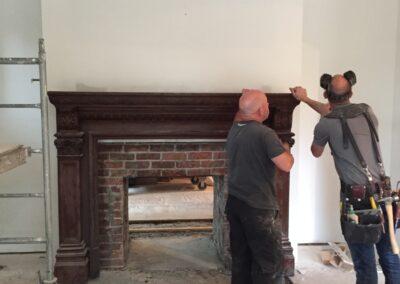 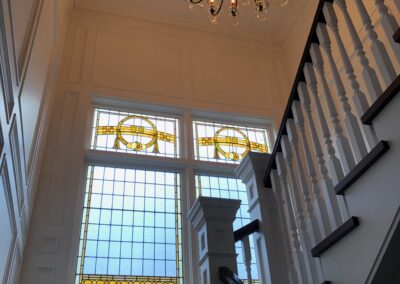 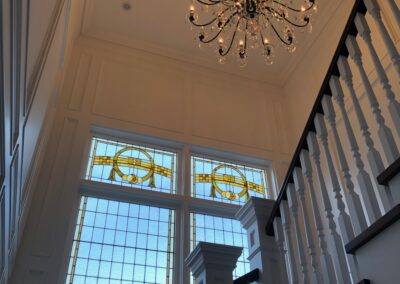 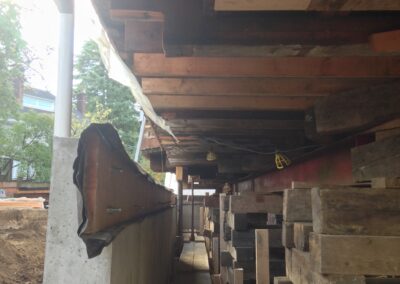 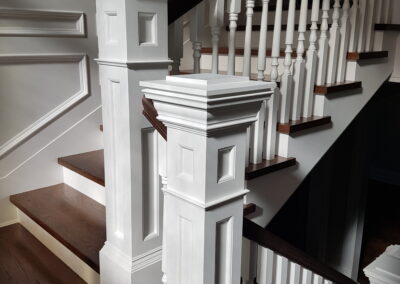 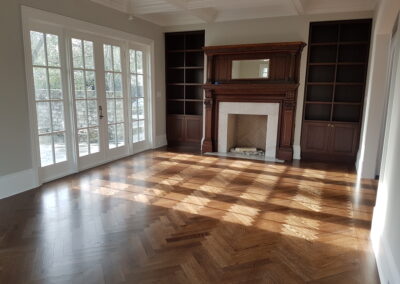 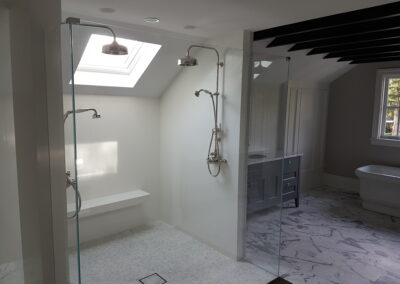 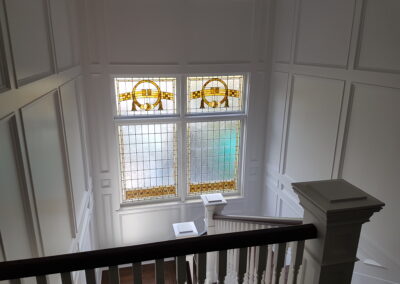 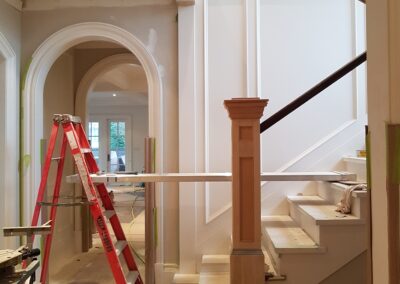 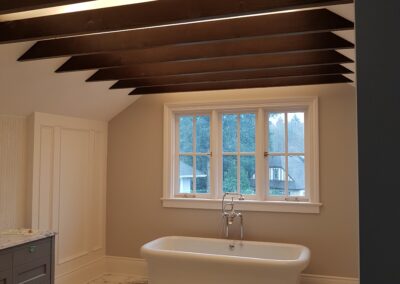 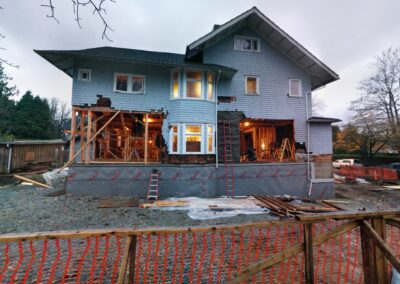 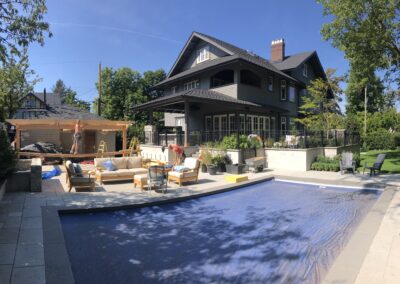 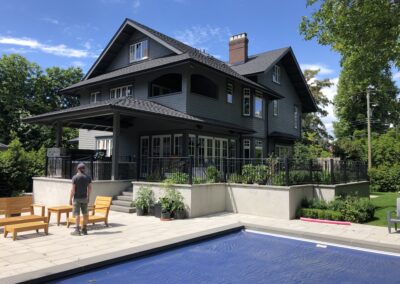 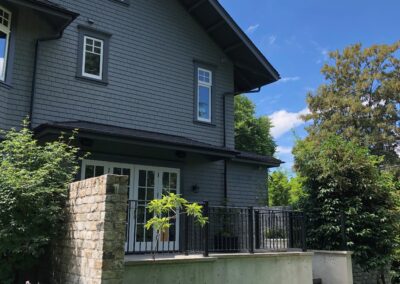 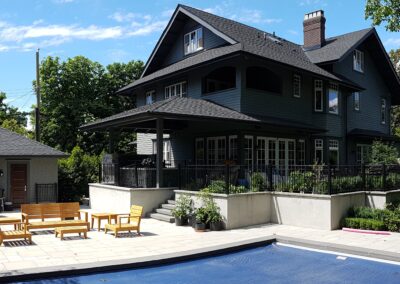 Solid wood windows and doors with period correct mortise and tenon joinery were manufactured by Vintage Wood Works. The windows were outfitted with appropriate bed moulding, water table and cleverly hidden flashing above. The cedar posts within the original basement were of vertical grain red cedar, salvaged and milled into exterior window and door casing. The fir beams within the basement were also of good quality mixed grain fir so we had them milled for use as lower level exterior trim.

Non primed no1 rebutted and rejoined sidewall shingles were site steamed to reinstate a substantial bellcast that sits over the belly band (barge board) which crowns the clapboard while also acting as a century old through wall flashing. The strong and bold massing of each elevation broken by masculine roof lines and discretely matched mouldings. The large stained glass windows on west elevation were restored and fixed back into their original jambs.

The existing fir tongue and groove soffits were also refreshed in place, replacing what was rotten from above. With no access to historic photos the original sleeper porch was restored based on living examples within the area. 3″ x 7″ profiled rafter tails were cut on site to match the prominent features of the existing roof. These replica rafters became a hand cut roof with exposed tails over an outdoor covered area attached just off the kitchen. Additional rafters were site mortised over custom steel knife plates returning north along the east building face.

The original placement of the house on the site plan had it hugging the west lane which gave use to extra yard and sunshine towards the east. A terraced hardscape was built up to capture this light and allows one to walk from the elevated garden into the house. A folding door system allows this space to be opened up to the interior living area. The flanking windows, built to look like doors precisely align with the muntin bars on the folding doors. Thousands of the very same granite cobbles that lined the early streets of Vancouver, covered in the same decade were locally salvaged and re-laid as landscape walls.

A technically exhausting and rewarding project that spanned 2 years of construction.