A fine example of retention along a section of West Broadway that has seen extensive demolition of Tudor revival, English and French story book houses that were modest and of excellent build quality. Few of these examples remain as most from this era have been indiscriminately destroyed.

The house dates to 1938 with single glazed casement windows set in groups of 3, storm shutters and an offset entrance putting this side gabled house within the interwar period. Humbled character similar to other smaller, yet more elaborate cottage and story book styles also found on this street. Simpler due to the economic hardship of the 1930’s. The hand cut roof from 1938 was rumoured to have been done by the same builder who built the ginger bread house up the street. The existing roof which was largely retained was hand cut with 2×6 Douglas fir.

The intention of the project was to maximize space within the top floor and better make use of a large roof that occupied a significant amount of uninhabitable attic space. An original north facing dormer was largely expanded into a north – south orientation which utilized area already accounted for floor area by the city. This allowed us to turn a single bedroom top floor into a 2 bedroom, 2 bathroom complete with walk in and separate study.

The roof was removed and the project was scaffolded with shrink wrap to keep our crew and the original finishings dry. Interior finishings which were mostly Honduran mahogany were carefully removed and stored for later reuse. 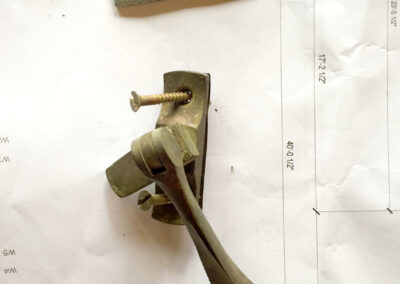 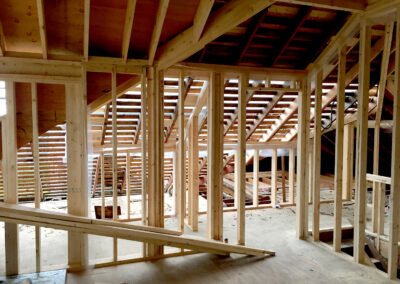 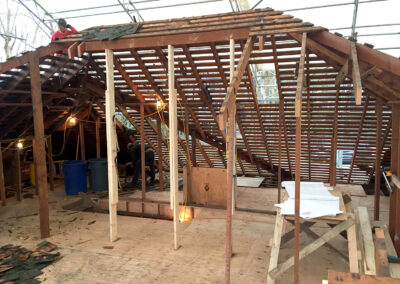 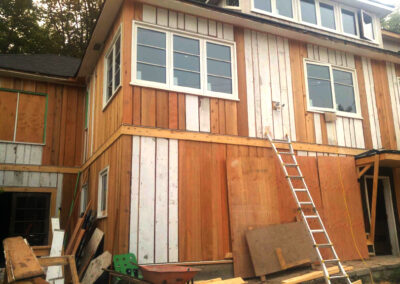 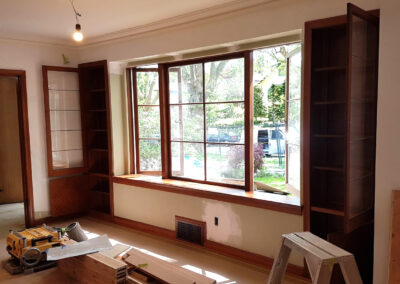 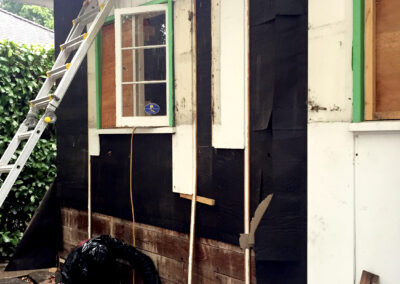 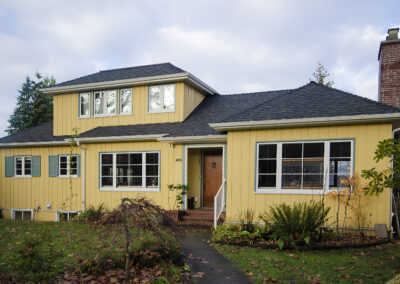 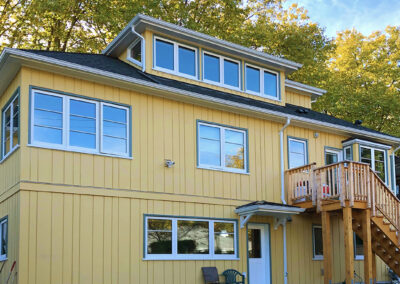 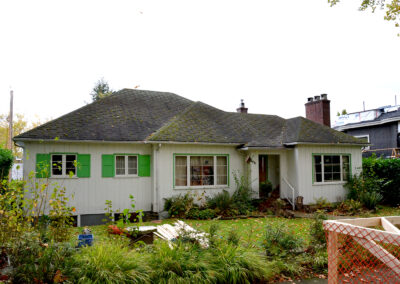 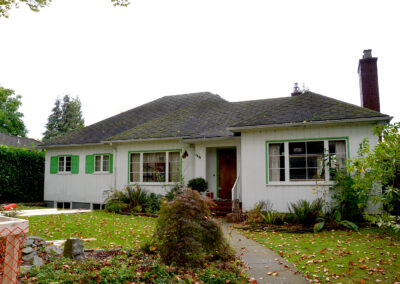 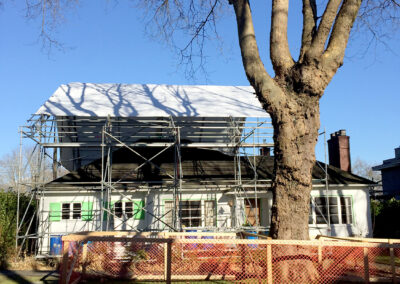 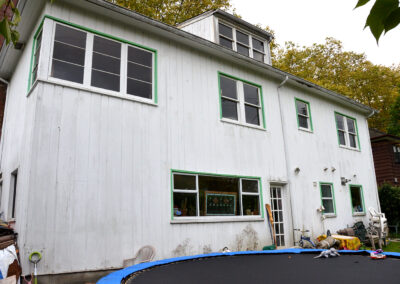 Extensive framing and underpinning were performed to provide a full height basement. The main floor plan was opened up to allow for better flow between the side entrance, kitchen and dining. A cantilevered window seat within a newly added window bay provide a sunny spot to enjoy breakfast. All main floor windows with the exception of the dining room and front main floor elevation were replaced. Original brass cam window handles were reused on the replica windows that mimic the existing casement windows retained along the street facing elevation. Windows were sourced to meet the current Vancouver u-value requirement of 1.4 and trick the average eye into thinking they were a match to the originally restored single glazed casement sash. Unique floor to ceiling structural bookshelves where built with client supplied vertical grain bear claw fir. Not only were the shelves load bearing, they also provide a place to store books, memories and sundries. The bear claw in fir, which we had never seen before is from the size of such a tree compressing and distorting the tightly knit growth rings. The original top nailed 3/8 oak flooring was retrofitted with staple floor heat from the underside. The client’s love of mahogany led us to sourcing some African mahogany to match existing finishes that were of Honduras Mahogany which has been restricted by CITIES since early 2000. Original mortise cassettes were plowed into new doors, reusing the existing 12 point crystal door knobs.

Custom siding was sourced and milled to match the unique vertical board pattern. Water table was added to terminate the siding where it abuts the foundation to kick moisture away from the foundation walls. Period appropriate trim and mouldings were locally sourced. A local colour consultant we work with helped pick the colours.

If you find yourself driving west past Alma on Broadway you will see much of its charm replaced with characterless stucco and tile boxes that simply don’t suit the neighbourhood or Vancouver’s architectural heritage. This project should contribute to the advancement and understanding of heritage in the hopes that the city of Vancouver and other potential projects within the city follow suit in an authentic means of preservation, not for bonus density or faux retention but to provide awareness in the importance of a streets’ history and charm. They shouldn’t be knocked down and replaced with ill-fitting tile & stucco disasters. The clients’ background in environmental retention and our expertise in heritage made this one happy to be saved interwar cottage house.